Pets can suffer the same ill effects from mould as humans. Symptoms can range from headaches, chronic congestion, flu like symptoms and respiratory distress. I have even heard of a cat who developed asthma from sleeping in a mould infested room. 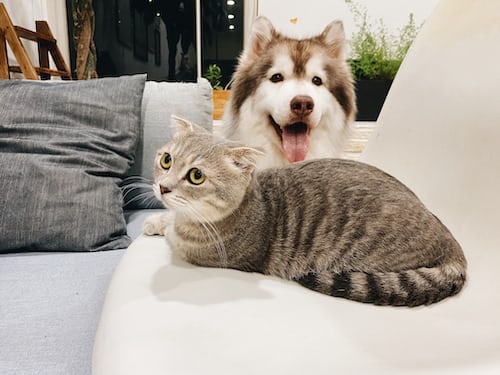 To prevent the mould from becoming established and spreading throughout your home it is important to treat mould as soon as possible. To ensure the health and well being of your pet and their safety during mould treatment follow these 4 easy steps to treating mould when you have pets.

How to treat mould when you have pets:

1. Remove: Safely move your pet from the room or area infested with mould. Ensure that they do not have access to this room at any time and that the area that they inhabit and sleep in is mould free.

2. Prevention: Try to identify and remediate the cause of the mould growth. Mould could be growing for several reasons including, leaking plumbing, rising damp, lack of sunlight, too many items in a room (ie. clutter). For further discussion on mould prevention read 10 Simple Steps to Tackle Mould in Your Home.

3. Dry: Wipe down any damp or condensation collecting in the affected room on a daily basis and keep the door to the room closed to avoid spores accessing other areas of the home. Take wet items such as clothes and towels outside to dry.

4. Treat: Apply a mould treatment when your pet is safely away and not present. Treat the mould with an Oil of Cloves for Mould solution or Oil of Cloves cleaning product. Oil of Cloves is used very dilute, only 1tsp per 1 Litre of water is lightly sprayed on the surface and the residue wiped away.

Oil of Cloves should be used with caution in pregnancy and not during the first trimester. Oil of Cloves for Mould as a cleaning solution is very dilute and the scent will dissipate rather quickly.

However, if you prefer not to use Oil of Cloves at all whilst your pet is pregnant, then you can follow these simple steps:

It is important to treat mould as soon as possible for the health and wellbeing of yourself, family and pets. Living with and breathing in mould can cause respiratory, allergic and sometimes behavioural reactions in humans and pets. To be safe, remove your pet from a mould infested room and treat the room whilst your pet is outside or in another room.